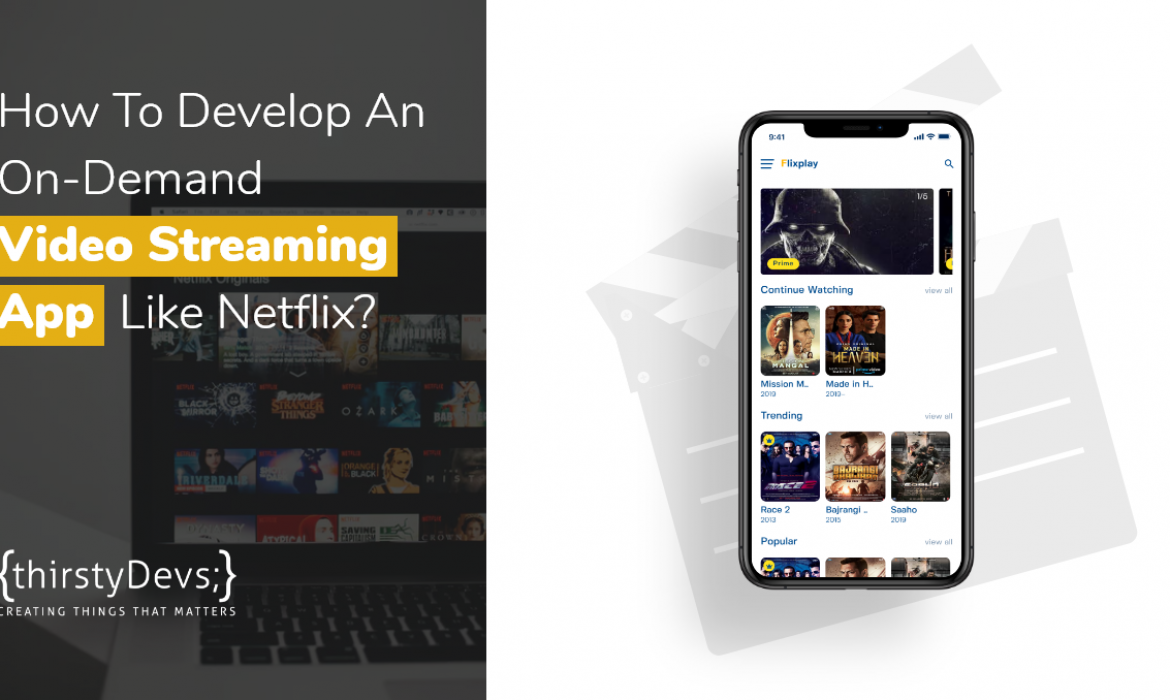 How To Develop An On-Demand Video Streaming App Like Netflix?

We all know how much Netflix has hyped up amongst the youth. Everyone wants to invest their time in watching some good shows and some meaningful documentaries, whatnot. It is one of the best sources to watch some best shows over this app. Netflix has just taken over another on-demand video app. We shall know all the details in this article of how and what are the ways of developing this app and why you should develop an on-demand Video Streaming App like Netflix. This app has something which nobody can withstand and even other similar apps are such that it can be the best version if hired under the expertise developers.

What Is An On–demand Video Streaming App?

You might be clear with Netflix which does not need any introduction to know it. It is well known amongst us. What are these Video Streaming App? We have been seeing that various movies, TV shows, and various other web series are part of these apps. It is a treasure and a good source for watching movies and other shows. It has got the various shows inbuilt where you watch it anytime hassle–free. Gone are those days where you had to wait for an episode of the TV show to realize and then we could watch it over.

They are something which we should invest in as it has a large scope of the people approaching it. Who does not like to watch good shows and binge watch it? Everybody does. For the one good show, they will go to other apps also to just watch it. It has that level of fever where people even take subscriptions to watch it over. Imagine you being a business owner of such an app?

There are almost about 236 million viewers who are viewing different shows and movies over Netflix or other apps like Netflix. Almost everybody keen to watch has been watching it over and over. This is the clear stats that you can run this app easily by catching people’s attention. These apps are always going to attract people’s attention and thus it is worth investing it.

As we all know there are various benefits to investing in an on–demand app like Netflix, it is also important to know why is it important to invest and what are the other features which help in boosting such business. It will help you to get the points clearer about developing an app like Netflix. It also helps in the significant growth potential which helps in the growth of the business of business owners of the app as well as customers get the entertainment packages.

We all have been using Netflix for our favorite shows and movies. We have been observing some of the features while using it. Similarly, there will be similar features in developing an On-Demand Video Streaming App like Netflix.

There is a free trial available for us to see and have a look at how this app works? Isn’t that the nicest feature that is highly beneficial to the people who are not at all aware of the working of the app? There will be a particular free trial period from which we can make out how the working of an app is.

There will be specific management of individuals‘ profiles and will have to make it an account after filling up the credentials to make one. This will help in the individual management of profiles. The profile of users as well as business owners are well managed with particular records saved. You can also save or add your favorite movies or shows into the watch list and can watch it later anytime you want.

You can easily download the content for watching it offline so one does not need the internet whenever the user wants to watch the videos.

Payment terms should be smooth so there is no doubt regarding the payment terms and other subscription formalities. In–app payment is available where you can pay from the app, do not have to run several apps for the payment, and just can’t finish up the payment by clicking it from the app itself.

This app will be renowned worldwide and thus it will be available in all different languages where everybody can watch and understand their languages. It is one of the best features where nobody feels left out of not being able to watch it. So it is a multilingual supported app.

There are more basic things that need to be focused on while developing an app like Netflix.

There have to be various strategies which should be developed to attract the people more to approach your app for watching the video streaming on that app. Strategies include the choice of selecting content by which maximum people are attached and attracted to approach for that app. When the app is ready it needs proper marketing and it needs to be spread over the maximum people. It needs a proper marketing strategy to develop the market of the app. ASO, monetization, and many other strategies are to be taken care of during the whole developing an app like Netflix. It is not easy to compete with Netflix but can achieve it if it is done properly. thirstyDevs ensures about developing an app in the perfect way possible.

If we look at the Netflix market it is highly developed and we have to study the reasons behind the popularity of one app. Nothing more to be worried about, it needs proper knowledge of knowing its audience. The taste of the audience regarding the content should be known by the business owners. This will help in achieving the maximum traffic by the people and it will take a different level hike. Not only that but it is important to spread over maximum geographical locations so that maximum people can approach to watch it and use it. At last, it will be beneficial to you as maximum traffic will be attracted to you for your content.

It is not easy to develop a big project like Netflix but it is not impossible. At the beginning of the development, it is important to use the Agile SDLC model and then start with the MVP. It is important to develop for various platforms such as android, web, and iOS developing systems. It should not be restricted to any of the developing systems.

The best skillful teams are present with the thirstyDevs which enhance in fulfilling the desire to achieve the goals of marketing the developed app as much as possible. Behind one app to fulfill, it needs a bunch of team members to develop it and at last making sure about the scope in the market. It’s not an easy task to develop an app as it has to be run through various challenges but thirstyDevs makes sure that it has the best team with them. Team includes;

A bunch of the mentioned team can make an app which is already existing in the family of thirstyDevs.

This app has different services to serve and thus it does not end doing one thing for developing an app. It has various things and almost all are different from each other and so it needs proper software to develop. Choosing the right software plays an important role in the making of an app as it is the basic thing that helps an app to be developed. It needs proper planning which should be easy to maintain the app and run through after it is developed.

It is an app which is worth investing in, it is important to know the cost of developing such a successful app that will be in high demand. It is worth investing in such apps where you should not even give a second thought to it. The basic pricing starts with the $10000 and $15000 and further it depends on the structure and the things which have to be included in the making of an app. Price may be any but it is worth investing as it has the maximum market value for business and can earn pretty much out of it.

Are you planning to compete with Netflix and make one of your own? You are at the right place to approach. thirstyDevs provides you with the best possible experience you will ever have of making an app. It also includes after services in case of any occurrence of objections. It will stand by you. The after service in any services matters a lot. So what are you thinking? Just grab this opportunity and start your own business like no other.